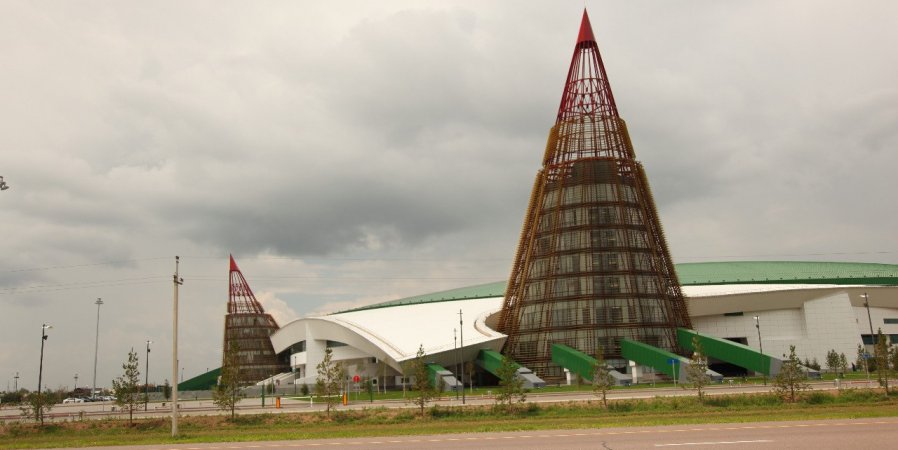 Sports gates of the capital.

"Alau" – the gates to the city. It is the first grandiose structure that is seen by everyone flying into Nur-Sultan.

During the design of Ice Palace “Alau”, the architects were inspired by the nature of Kazakhstan: spring steppes with thawed patches of melted snow – green elements on the façade of the building; and the first, rising to the sun snowdrops – three yellow administration towers.
The architectural concept has found its way in the Palace logo, in which the three elements are enclosed.

The green colour symbolizes renewal, youth and spring.
Blue – represents the ice arena – the foundation of the facility.
Orange, a fiery colour – is the name of our facility. “Alau” – fire – the faithful companion of the nomads. Orange – is a colour of movement, enthusiasm and freedom. The key meaning and symbolism of orange: speed, rhythm and buoyancy.

A combination of these elements for us is our source of energy. Thanks to this symbiosis we obtain "flaming ice". "Alau" is a temperamental, partial and energetic project, whose team is always aiming to new achievements, athletes – to new records.

"Alau" – a stadium created for records.

The project “speed skating stadium” is not just a building with beautiful appearance.
The manufacturing of fast ice has become available thanks to a perfect combination of technical equipment, professionalism of the staff and a unique architectural project.

In terms of the control of ice conditions and control of the climate in the arena, there are no analogues to “Alau”. Existing conditions allow us to find the optimum parameters for temperature and humidity to create the fastest ice. Temperature measurements above the ice surface across the 400 meter track show a difference of only on degree Celsius. The heat load on the ice is less because of the particular structure of the roof. The shape of the roof is curved towards the center, which allows us to control the flow of air. Furthermore, the rising warm air separates the spectator stands from the ice arena. An invisible wall of airflow allows for better climate control in the arena itself. Owing to this system, the spectators are comfortable in their seats. At the same time on the ice, literally a couple of meters from the stands a wholly different microclimate is produced.

A wall of warm air also plays a very important role – it slows down particles of dust which spectators bring in with them on items of clothing and shoes. This can seem as a minor detail, but that which is unseen to the human eye has a negative impact on the quality of the ice. This is why new, just built speed skating stadiums cannot show good results in their first years of operation. The fact that “Alau”, literally from the first days of operations breaks records, demonstrates that the potential of the Ice Palace is tremendous. With every new competition the quality increases, as does the accuracy of the equipment setup; the dust recedes, optimal parameters for water treatment are chosen. That is why specialists are certain that the 9 continental records set during the 7th Asian games – are far from the potential limit.